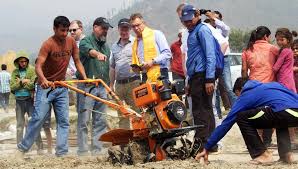 The government launched MEDEP in 1998 with the aim of supporting socially excluded groups living below the poverty line by promoting off-farm employment. Last December, the government internalised the programme under the name Micro Enterprise Development for Poverty Alleviation (MEDPA).

Speaking at a programme on Wednesday, Secretary of the Ministry of Industry, Commerce and Supplies Yam Kumari Khatiwada said the government would implement the programme with domestic resources through MEDPA. “The ministry is in the process of formulating a directive to run the programme which will soon be sent to the Cabinet for final approval,” Khatiwada said.

The government is considering providing funds for micro-enterprise development to provincial and local governments. Institutionalising MEDPA at the grassroots level, enhancing market access and improving the quality of the products have been identified as the key challenges, according to the ministry.

According to Khatiwada, the ministry has run orientation programmes for poor people from more than 500 local units to encourage them to operate micro-enterprises. “A large number of women in particular have benefitted from the programme,” she added.

During the past two decades, a total of 131,680 people from 77 districts have benefitted from the programmes offered by MEDEP. “Among them, 74 percent were women and 26 were from the Dalit community,” the ministry said.

Over the period, the programmes were able to provide direct employment to 170,149 people and indirect job opportunities to 172,425 people. A study conducted by MEDEP in 2014 showed that the micro-enterprise programme lifted 525,200 persons out of poverty. Minister for Industry, Commerce and Supplies Matrika Prasad Yadav said the government aimed to minimise migrant worker departures by promoting micro-enterprises and small industries. “However, a lot more has to be done to benefit poor people living in rural areas,” Yadav said.

Criticising past programmes for failing to promote micro entrepreneurs into industrialists in the past, Province 7 Industry Secretary Sudhir Kumar Koirala urged the government to introduce programmes to help these enterprises expand the market for their products abroad.