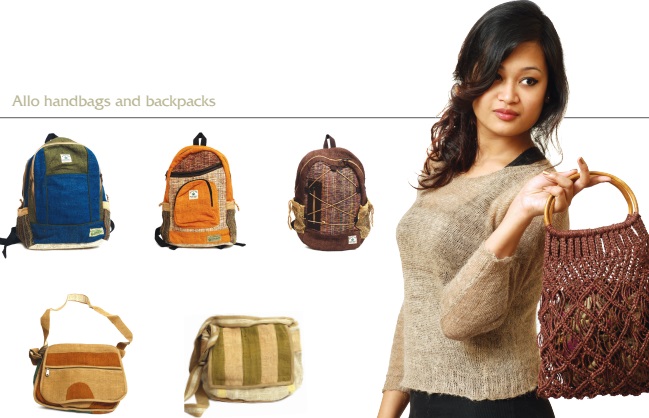 Allo (Girardinia diversifolia), also known as the Himalayan Stinging Nettle, plant belongs to the “Urticaceae”, nettle family. Allo is a fibre-yielding perennial plant that grows wild between 1,200 to 3,000 metres above mean sea level. The history of Allo, used as natural fabrics, dates back to time immemorial which was the main fabric for indigenous communities such as the Magars, the Gurungs, the Rais and the Limbus in Nepal. This fact is proven byabout 115-year-old local Charkha (spinning wheel) still conserved by the Magar community of SalijaVillage Development Committee (VDC) in Parbat district. The wheel was used to make yarn out of theprocessed fibre of Allo. They used to make different products out of its bark and use in their daily life and for clothing purpose. This natural fabric was replaced by the modern machine-made textiles such as cotton and synthetics about a century ago. However, with the increasing consciousness to use natural fibre as a fabric in the recent days, MicroEnterprise Development Programme (MEDEP) in the districts of the western part of Nepal and Eco-Himal, an Austria-based INGO working in Makalu-Barun conservation area, started exploring the possibilities of reviving the Allo bark as the natural fibre by diversifying the products in the mid to the late 90s. Later, it was revived by the same communities and now they are making more than 100 different products (handicrafts) which are exported in small quantities annually. Most importantly, during the last decade or so, the carpet industries in Kathmandu are using Allo yarns in carpet-making. Such carpets are exported to many countries. The bark of the stem of Allo contains fbres with unique qualities, strength, smoothness, and lightness.As the plant grows above 1,200 metres, most areas for harvesting are diffcult in terms of access, often requiring a number of days to travel to forest, harvest Allo, and return with loads of Allo bark. Allo is processed following the traditional methods practised since generations. Usually after harvesting the stem either the fbre is peeled off immediately or left for several days for drying. If it is dried then the dry stems are soaked in water for a day before peeling is done. Peeling removes the outer bark and leaves the inner fbre for further processing. The next step involves cooking inner barks in a drum with wood ash to lighten it and make it soft. This takes about 2-3 hours. After cooking, there is a repetitive process of beating with wooden hammer to soften and extract fbre and washing in clean water usually done in a stream or river. The bundles of clean fbre are then left to dry in the sun. The next step involves soaking fbre in water and mixing either with maize ﬂour (more common in the western part of Nepal), or Kamero (locally available white clay containing mica) and drying to obtain a white lustre. The fbres are then extracted with the help of simple household tools like forceps. Once the soft fbre is obtained it is ready for spinning into yarn.Mostly, women are involved in all the stages of collection and processing of Allo. The spinning is either done with the help of wooden hand spindles locally called “Katuwa”, or with spinning wheel “Charkha” which has two common variants: handoperated “Haate” and foot-operated “Khutte”.